Given that the Olympics are on right now, we figured it would be the perfect time to talk about the Olympic venues we have right here in our own backyard in Lake Placid! Here’s a little history on the venues, as well as a few spots you can visit when you come to town. You can even try your own run at the bobsled or luge!

The History of the Olympic Venues in Lake Placid, NY

Around the 1920s, Lake Placid received worldwide recognition, and its 1929 bid to host the Winter Games was successful! Lake Placid became the host of the Winter Olympic Games in 1932 and in 1980. Since then, our small little Adirondack village has been labeled as the nation’s first winter resort. Given its location in Upstate NY, it’s a very popular area for competitive and recreational winter sports. We’re proud to be the famous “Olympic Town in the Adirondacks!”

Visiting the area? Below are four Olympic venues in Lake Placid that you can check out while you’re in town:

Love ice skating and hockey? The Olympics Sports Center is the place to be! This is the actual facility that the Miracle on Ice game happened back in 1980, when the U.S. hockey team pulled off one of the biggest sports upsets in history by defeating the team from the Soviet Union.

If you’re looking for some entertainment, The Olympic Sports Center hosts a variety of events, shows,  classes and sports camps. Feel like putting on your skates and going for a spin? The Olympic Speed Skating Oval is open to the public on a daily basis during the winter.

Looking to learn a little history? The Olympic Museum features interesting exhibits and video booths plus you can even check out some of the equipment used by some of the world’s greatest athletes.

Whiteface mountain is a must visit when you come to Lake Placid. Only a short scenic drive from Lake Placid, you’ll find the famous downhill skiing slopes of Whiteface Mountain. These slopes have challenged Olympic champions and continue to challenge Olympic hopefuls and recreational skiers. With 76 trails, there are runs for all ability levels.

Not a skier? In summer and winter, the site’s Cloudsplitter Gondola rides are available for visitors to ride to the Little Whiteface summit and relax at an observation deck and picnic tables. The views at the top are absolutely incredible!

s of the Adirondacks. The sky deck on the 120-meter jump affords breathtaking views of Mt. Marcy – the highest peak in the State of New York, the John Brown Farm historic site and the beauty of the Adirondack wilderness. You can access the sky deck by chairlift and elevator.

Looking to see some action while you’re in town? Nordic jumping training and competitions take place here year-round at the Ski Jumping Complex. You can watch skiers practice their aerial acrobatics year-round and the in the summer land in a 750,000-gallon pool!

Book Now
Back to Blog Archive 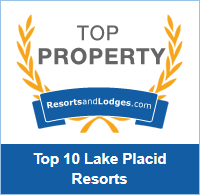